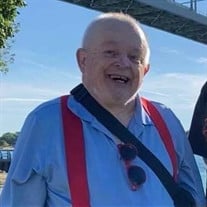 Terry Welsh, of Petrolia, passed away peacefully at Fiddicks Nursing Home on Monday, September 27, 2021, he was 66 years of age. Terry was the son of the late Fred (1988) and Betsy (2019)(nee Egan) Welsh. He is survived by his brother Dave and Liz Welsh of Petrolia and nieces and nephews of Cory (Elyse) Welsh and their children Ellie and Owen, Amy Welsh, Sydnie Welsh, and Keely (Michael) Vanhevel and their son Clark. He is also survived by uncles John and Margaret Egan and John Evans. Terry was also predeceased by a brother Robert (2021) and niece Melissa (2015). Terry Welsh was a loving son, brother, uncle, nephew and friend to many. He had the greatest belly laugh known to mankind. When he laughed, the room lit up! His nieces and nephews adored his curiosity of life, and they in turn, gave him joy as he watched them grow throughout the years. Terry worked at and was supported by LCDS and was forever grateful for his companionship and friendship with his counsellor Ben. With Ben’s support, and the encouragement of his brothers, Terry created personal goals and took pride in his accomplishments. He dreamt of singing the Canadian anthem at local hockey games for the Squires and Sting, and made that dream a reality. Terry went on to sing at many community events and at church. He sang just like Jim Nabors! Terry loved to travel, take in sports games and wrestling, and was often found at Tim Hortons enjoying a tasty treat. His favourite place to be was at Dave and Liz’s house for his weekly Sunday dinner. His eyes lit up when he picked out a pop, and sat down to enjoy a full plate of food! Watching him laugh while his brothers told stories and shenanigans of their childhood, was the greatest gift. He idolized Bob and Dave and they truly loved him unconditionally. Terry was a gentle, sweet man who became the wonderful person he was because of the community love and support shown throughout his life in Petrolia. If ever there was an example of a community raising a child, Terry was blessed to feel such love. Our sincere thanks to everyone in Terry’s LCDS family, the staff, fellow residents and Mike Fiddick at Fiddicks Nursing Home and all of his Petrolia friends for spoiling Terry all his life. Heartfelt thanks to Terry’s sister in law Patti for writing this wonderful tribute. Interment will be held privately in Hillsdale Cemetery. A celebration of life will be announced later As expressions of sympathy, memorial donations may be made to Lambton County Developmental Services (lcdspetrolia.ca).

Terry Welsh, of Petrolia, passed away peacefully at Fiddicks Nursing Home on Monday, September 27, 2021, he was 66 years of age. Terry was the son of the late Fred (1988) and Betsy (2019)(nee Egan) Welsh. He is survived by his brother Dave... View Obituary & Service Information

The family of Terry Welsh created this Life Tributes page to make it easy to share your memories.

Terry Welsh, of Petrolia, passed away peacefully at Fiddicks...

Send flowers to the Welsh family.