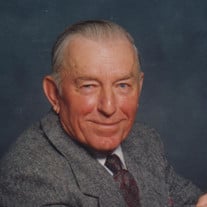 Stanley Ervin Racher, in his 97th year, passed away at Fiddick’s Nursing Home, Petrolia, on Friday, July 12, 2019. He was predeceased by his wife, Shirley (nee Brandon) Racher (1990), brothers Grant (1991), Keith (2004), Glenn (2009) and Robert (2017), and his sisters Shirley (2007), Betty (2011), and Dorothy (2015). His parents were the late Harland (1986) and Hazel (nee Lawson) Racher(1987). He is survived by his sister Fran (Gord) Holmes and his sister-in-law Marion Racher. He is also survived by his children Pat and Norm Triest, Jim and Audree Racher, Connie McCallum, John and Barb Racher, Barbara Douglas, and Randy and Lori Racher. He was a Grandfather to 32 grandchildren and Great Grandpa to 53 great grandchildren. He was predeceased by his companion and friend Ruth Roberts (2016) and her children and grandchildren of Joe and Anne Marie Lucan, Jody, Tyler, and “G.G.” of Ty. Stanley has been a dedicated hardworking farmer in Enniskillen Township since 1935. A funeral service for Stanley Racher will be held Friday, July 19, 2019 at 1:00 p.m. from the Needham-Jay Funeral Home, 4059 Petrolia Line, Petrolia, visitors will be received prior to the service from 11:00 a.m. to 12:45 p.m. Rev. Jim Breen of Hope United Church is officiating. Internment will be in Hillsdale Cemetery. In lieu of flowers, donations are requested for C.E.E. Hospital Foundation (www.cchf.ca). Memories and condolences may be shared online at www.needhamjay.com.

The family of Stanley Racher created this Life Tributes page to make it easy to share your memories.

Stanley Ervin Racher, in his 97th year, passed away at Fiddick’s...

Send flowers to the Racher family.