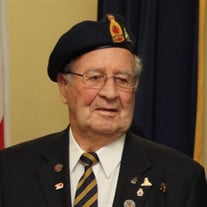 McLean, Sidney A. (Sid) at C.E.E. Hospital of Bluewater Health, Petrolia. On March 13th 2019, after a brief illness, Sid passed away peacefully with his family by his side. Sid was born in Oakdale, ON, on March 2, 1924 and had just enjoyed his 95th birthday celebration. He was the son of the late John and Elizabeth (nee Ward) McLean. He is predeceased by his wife Ileen (nee Hyatt) (2006) and by his son Bob (2006) (Dianne). Father of Wes (Debbie), Ron (Marlene), Sharon (Larry) Watson and Jim (Colleen). Sid is also survived by Ileen’s children, Nancy (Bob) Matheson and Brian (Jane) Racher, as well as several Grandchildren and Great Grandchildren, and sister Orilla Northcott. Predeceased by his brother, Jack and his sisters, Matilda, Mae, Kate, Jennie and Joyce. After many years working at Imperial Oil, he retired on May 1, 1985. Although his military service record shows a much earlier birth date, like many young Canadians, Sid lied about his age when he enlisted to serve his country during WWII. After D-Day he fought as a member of the 5th Anti-Tank Regiment in France, Belgium and Holland. In 2014, Sid was very proud to have been awarded the rank of Knight of the French National Order of the Legion of Honour. The Legion of Honour being the highest national order of France. Visitors will be received by the family on Monday from 6-9 p.m. with a Royal Canadian Legion No. 216 service at 8:45 p.m. at the Needham-Jay Funeral Home, 4059 Petrolia Line, Petrolia where a funeral service will take place on Tuesday, March 19, 2019 at 1:00 p.m. Interment in Hillsdale Cemetery. In lieu of flowers, donations to C.E.E. Hospital Foundation (www.ceehf.ca) or Royal Canadian Legion Branch No.216 Petrolia Building Fund, or charity of your choice would be greatly appreciated. Memories and condolences may be shared online at www.needhamjay.com.

McLean, Sidney A. (Sid) at C.E.E. Hospital of Bluewater Health, Petrolia. On March 13th 2019, after a brief illness, Sid passed away peacefully with his family by his side. Sid was born in Oakdale, ON, on March 2, 1924 and had just enjoyed his... View Obituary & Service Information

The family of Sid McLean created this Life Tributes page to make it easy to share your memories.

Send flowers to the McLean family.