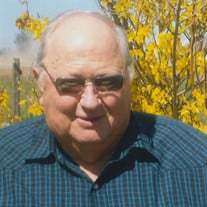 Passed away with his family by his side at Bluewater Health, Sarnia on Saturday, June 2, 2018. RON THOMSON, of Croton, was in his 77th year. He will be missed by his wife of 56 years Marion (nee Oliver). He will be missed by his sons Jim (Kathy) Thomson and Dan (Roxanne), his grandchildren Kelly (Brad) Anderson, Krystal (Cody) Wasson, Kyle Thomson, Racheal (Brendan) Keogh, Amanda Thomson, and Micheal (Shae) Thomson and his great grandchildren Brynlee and Alanna Anderson, Angel and Selena Keogh, Kieran Woods, and Tyson Thomson. He will also be missed by step-grandchildren Matthew Freeland and Brad Woods. Ron is also survived by his mother-in-law Violet Oliver. He is predeceased by his parents Gordon and Pearl Thomson, his siblings Eugene (Shirley) Thomson, Vivian (Herb) Gould, and Donald Thomson, and his father-in-law Melvin Oliver. He will also be missed by his wifes family; Orial (the late Russell) Carpenter, Elaine (Jim) Newport, Randy (Darwin) Oliver and the late Karen Hanses. He will be missed by many nieces and nephews and his many neighbors and friends. Ron was a proud retired member of Carpenters Local 1256. Visitors will be received on Wednesday from 2 to 4 and 7 to 9 p.m. at the Needham-Jay Funeral Home, 4059 Petrolia Line, Petrolia where a funeral service will be held on Thursday, June 7, 2018 at 11:00 a.m. Interment will be in Oil Springs Cemetery. As expressions of sympathy, memorial donations may be made Heart and Stroke Foundation (www.heartandstroke.ca) or C.E.E. Hospital Foundation (www.ceehf.ca). Memories and condolences may be shared on-line at www.needhamjay.com.

The family of Ron Thomson created this Life Tributes page to make it easy to share your memories.

Passed away with his family by his side at Bluewater Health,...

Send flowers to the Thomson family.