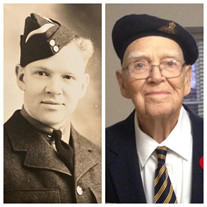 On December 7th, 2020 Ronald Cameron McEwen passed away with family at his side, at Vision Nursing Home in Sarnia Ontario. Ron was just four days away from his one hundredth birthday. Ron was predeceased by his first wife Gloria (nee Welch) in 1973 and his second wife Eve (nee Stephenson) in 2015. He is survived by his sons Michael McEwen (Douglas Payne) and David McEwen (Carol) and step children Mark Stephenson (Sharon) and Rhonda Lee Read (Tony). Ron was the proud grandfather of Craig McEwen (Stephanie) and Heather Carvalho (David), five great grandchildren Keira, Kate and Emily McEwen and Raya and Ayla Carvalho, and step-grandchildren Greg Stephenson (Krystle), Kristy Morrison (Mike), Jayme Stephenson-Hanson (Andre), Martine Read (Andy Vines) and Charlie Read (Megan), Michael Payne (Jennifer Ninni), Andrew Payne (Misha) and Nick Reford, and eight step great-grandchildren, Fiona, Lucy and Rachel Stephenson, Peyton and McKenna Morrison, Elijah and Eloise Stephenson-Hanson and Otis Read-Vines and one step great-great-grandson Jaxon Morrison. He will also be greatly missed by many nieces and nephews and their families. Ron was the son of the late Peter and Jean McEwen and is predeceased by his brother Charles McEwen and sister Elizabeth Fraser. Ron was born in the Charlotte Eleanor Englehart Hospital in Petrolia on Dec. 11, 1920 and was brought home in a horse drawn buggy. He attended the one room school house, SS#8 Plympton, with some 28 to 30 students in 8 grades. He passed the entrance exams and went to secondary school in Sarnia, staying with his Aunt and Uncle for two years. He was on the farm until he joined the Airforce in December, 1942 and was called up in March 1943 and spent 3 years serving in Canada and England. He referred to his bomber pilot’s training and wings as his “college education”. Ron was a founding member of the Royal Canadian Legion, Branch 388, in Wyoming, Ontario. He bought half of his father’s farm through the Veteran’s Land Act and in 1948, Ron married Gloria Welch, a nurse, and started a family. Ron lived a full and interesting life and was very community minded. He was on the school board and championed the central school which brought together a number of small one room schools in order to improve primary education in the township. He expanded the farm by 100 acres and took up “Ridge Till” farming, a practice which eliminated ploughing and reduced soil erosion. In1987 Ron received the “Conservation Farmer of the Year” award for Lambton County. Ron participated on the board of the Wanstead Farm Co-op for many years. He was a member of the Legion Building Committee resulting in the opening of a new Royal Canadian Legion facility in Wyoming in 1972. Ron and Eve were married in November 1974. He was a major force in building the “Refundable Life Lease Apartment Building for Seniors” called the Royaleigh in Wyoming in 1995/96 where he and Eve lived for twenty years. Ron loved to travel and he and Eve travelled extensively in Canada and abroad visiting Florida, California, The Yukon, Alaska, Australia, New Zealand, Fiji, England, Scotland, Ireland, Germany, Austria, Italy, Holland and France. After Eve passed away in 1995 Ron made his new home at Landmark Village for Seniors and recently moved to Vision Nursing Home. The family would like to thank the staff of both organizations for their excellent care and for making Ron feel welcome, comfortable and safe. Due to the current pandemic restrictions, a private funeral will be attended by his closest relatives. In lieu of flowers you’re invited to make a donation of remembrance to the Royal Canadian Legion, Branch 388, Wyoming or to the Canadian Cancer Society (cancer.ca). There will be a celebration of life at a later date. Memories and condolences may be shared online at www.needhamjay.com

On December 7th, 2020 Ronald Cameron McEwen passed away with family at his side, at Vision Nursing Home in Sarnia Ontario. Ron was just four days away from his one hundredth birthday. Ron was predeceased by his first wife Gloria (nee Welch)... View Obituary & Service Information

The family of Ron McEwen created this Life Tributes page to make it easy to share your memories.

On December 7th, 2020 Ronald Cameron McEwen passed away with...

Send flowers to the McEwen family.