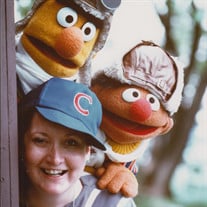 Mary-Pat Gleeson, a spirited advocate for Petrolia, died at her beloved Charlotte Eleanor Englehart Hospital on Saturday Jan. 30 at the age of 73. Feisty and funny with a wicked sense of humour, she could light up a room and forged many lifelong friends. Her warmth attracted new friends, young and old, through the decades, wherever she lived. Being a Girl Guide and then one of its leaders had a long influence on her life. Mary-Pat was passionate in her causes and fearless in speaking her mind. She could be a force and a marshmallow too. Her appetite for life included all things Irish, too many books and films to mention, and chocolate anything. A gifted storyteller, she also reveled in listening to tales of friends, embraced life’s absurdities and sorrows, and was fond of saying “Jeeze Louise” in mock surprise or “Get outta town!” Born in Petrolia to Lew and Bertha Gleeson, strong promoters of Petrolia, Mary-Pat decamped to Windsor for her university degree in theatre. She returned to Petrolia to become the Parks and Recreation manager during the heady 1970s, when the town enjoyed a “renaissance” fuelled by young energetic professionals. Petrolia charged to the forefront of heritage in Ontario and the groundbreaking Theatre Passe Muraille performed a collective depicting Petrolia people at Victoria Hall to rave reviews in the Globe and Mail. Even as a young girl on Maude Street, she wanted to work in the film industry and she made that happen. During her 25-year career in film she rose to be vice-president of marketing for Alliance Communications in Toronto. Working with Hollywood heavyweights like David Cronenberg, Robert Altman and Roberto Benigni and even getting flirtatious remarks from actor James Earl Jones, provided her with a lifetime of wild tales. Her better known films included Trainspotting, Pulp Fiction and The English Patient. One of her many fun highlights was on working the Muppet movie, Follow That Bird. At Toronto Film Festivals she was known and feted by the rich and famous. After Alliance, she moved to Vancouver, as a partner and vice president of marketing for the newly formed Red Sky Entertainment. When her mother’s health was failing in 2001, she returned to Petrolia, as she always said she would. For years she freelanced as a film script editor and analyst while plugging herself into community life. From 2006 to 2018 she served as a hardworking knowledgeable town councilor who mentored several and fought for anything she considered good for Petrolia. She also was a champion of the CEE Hospital. A fierce fighter to save the hospital and better its services, Mary-Pat was the founder and driving force to create the Central Lambton Family Health Team. Establishing a new medical building bringing patients and physicians together, recruiting new doctors and supporting them was a massive achievement benefitting the entire community. Additionally, she chaired the Charlotte’s Task Force for Rural Health for the past eight years and brought teams together to establish 24-hour emergency access and other improvements. She was exceedingly thankful to her devoted medical team of Dr. Khan, Dr. Crombeen, Dr. Mall and Sarah Milner, her thoughtful caregivers, and to her many friends. Her parents and brother, Michael, predeceased her. Mary-Pat is survived by family members Kelly and Donna Thomson, Penny and Paul Patterson, Alyssa Paulley, Jan Gleeson, Kelly Gleeson Thompson and family, plus her many, many friends. At a future date, friends will gather for a party in her name as she wished. And Mary-Pat is thanked for her Irish coffee recipe. Donations in her memory may be made to CEEH Foundation (www.ceehf.ca) and the ALS Society (www.als.ca) through Needham-Jay Funeral Home in Petrolia. www.NeedhamJay.com

Mary-Pat Gleeson, a spirited advocate for Petrolia, died at her beloved Charlotte Eleanor Englehart Hospital on Saturday Jan. 30 at the age of 73. Feisty and funny with a wicked sense of humour, she could light up a room and forged many lifelong... View Obituary & Service Information

The family of Mary Pat Gleeson created this Life Tributes page to make it easy to share your memories.

Mary-Pat Gleeson, a spirited advocate for Petrolia, died at her...

Send flowers to the Gleeson family.