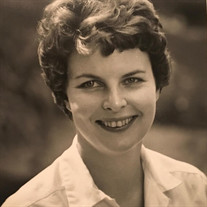 With grace and dignity, Mary Allison Feniak (nee Dexter) passed away Saturday, November 17, 2018, at the age of 84. She lived a full and dedicated life, spending her time to help her community and her family. Born in 1933, she was raised in Ottawa and Winnipeg, and loved her summers spent at the family cottage in the Gatineau area. She followed her heart to earn her diploma in nursing from the Ottawa Civic Hospital in 1956, then a certificate in Nursing Education from UWO in 1958, while working at the Sarnia General Hospital. In 1962, she married George Feniak, and began to raise her family. Mary brought all of the energy she had used in her career to her family, making clothes and food from scratch, canning and preserving each year from the garden. She took courses in tailoring so she could make suits for her husband, as well as clothes for the kids. Mary learned to quilt, and made numerous quilts for her family. She helped to run a 4H sewing and cooking club, served on the Wyoming Fair board, and much more. Summers were always spent at the cottage, where Mary shared her love of fishing, boating, swimming and Little Whitefish Rummy. No trip was complete without cinnamon buns and English muffins baked by Mary. Mary eventually re-entered the working world after earning a Bachelor of Nursing in 1987, and a Masters of Education in 1989 from University of Windsor. Mary began working for the Lambton Health Unit, and quickly established herself as seniors’ coordinator and helped launch the Lambton Seniors’ Association. Mary had a fighting spirit, especially on behalf of others; she advocated for her son, Andrew, for seniors, and for anyone who needed a helping hand. She gave generously of her time, even after retirement, to her community, but especially to her family. She was a fully engaged grandmother who could be counted on for babysitting, baking cookies, or sewing clothes. She taught her children and grandchildren her secret recipes, and encouraged them to do their best at home and in the world. Mary had a love for classical music and reading, and was a champion knitter, mostly dishcloths, and could be found watching football, home improvement shows, or murder mysteries on television in later years. Mary will be lovingly remembered by her husband, George, her children Mark and Alison, her daughter-in-law Serena, and her grandchildren, Katie, Samantha, Marin, Jessica and George. She was the centre of our family as long as we can remember, and we can only hope to live up to her example. The service will be held on Friday, November 23, 2018 at 11:00 a.m. from the Wyoming United Church, 730 Second St., Wyoming. Interment of cremated remains to follow in Wyoming Cemetery. In lieu of flowers memorial donations may be made by cheque to the Lambton Seniors’ Association (www.lambtonseniors.com), Lambton County Developmental Services (https://lcdspetrolia.ca), or St. Vincent de Paul Society. Arrangements entrusted to Needham-Jay Funeral Home. Memories and condolences may be shared online at www.needhamjay.com.

With grace and dignity, Mary Allison Feniak (nee Dexter) passed away Saturday, November 17, 2018, at the age of 84. She lived a full and dedicated life, spending her time to help her community and her family. Born in 1933, she was raised... View Obituary & Service Information

The family of Mary Feniak created this Life Tributes page to make it easy to share your memories.

Send flowers to the Feniak family.