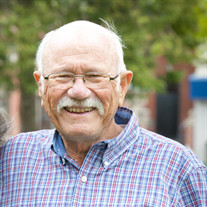 Leonard George Brown passed away peacefully at C.E.E. Hospital in Petrolia on Saturday, July 6, 2019 with his family present after a valiant battle with cancer. Len was born in Seaford Town, Westmoreland, Jamaica on February 9, 1937. He was in his 83rd year when he passed. Len was the loving husband of Norma (Buckeridge) and will be deeply missed by her. They had just celebrated their 43rd anniversary on July 3. He will also be missed by his son David (the late Jo Anne) Brown of Calgary, Alberta and their three children Nicole (Scott) Bishop, Tyler Brown, and Olivia Brown; and his step-son Paul (Jeannette) Schiffner and their three children Erin Schiffner, Alexandra Schiffner, and Scott Schiffner. He is survived by his three sisters Edith, Dorothy, and Callista, and he was predeceased by seven brothers. There are also a large number of nieces and nephews in the Brown clan who will miss Len greatly. Len was also very close to many in Norma’s family; the Buckeridges will miss him too. After an idyllic childhood in Jamaica, Len moved to Toronto, Canada in May 1955 at the age of 18 years, where he became part of the vibrant Jamaican-Canadian community. There were many memorable events over the years with lots of great Reggae music, and some rum too! Len and Norma settled in Brampton, Ontario with David and Paul in the summer of 1976 shortly after they got married. They lived there until the fall of 1999 when they moved to Petrolia for their retirement years. Over the years he and Norma went on trips with and visited both the Brown and Schiffner families. There were many memorable Christmas and Thanksgiving dinners, a cruise, visits to Jamaica, trips to Calgary, and much more. He and Norma were very special grandparents to both David and Paul’s children, and they formed very strong and special bonds. Len was an avid gardener who had a way with plants. He always maintained a substantial backyard garden when he had the space, or rented a plot from the city when not. He was always very proud of his vegetable crop when it came time to harvest it, share it and eat it! He was pretty good at growing beautiful flowers too. He was also a great sports fan, and he loved to support local teams (Argonauts, Maple Leafs, Blue Jays, etc.). In the early years, he had season tickets for the Argonauts and enjoyed taking David and Paul to the games. He then became an avid Blue Jays fan, and went to see many games in Toronto and was thrilled when they won the World Series in ‘92 & ‘93. In later years, he would watch or listen to almost every game and sometimes keep scores. He was still waiting for another Leafs Stanley Cup run! Visitors will be received from 6:00 to 8:00 p.m. on Thursday, July 11 at the Needham-Jay Funeral Home, 4059 Petrolia Line, Petrolia. The funeral service will be on Friday, July 12 at 11:00 a.m. at the same location, after which interment will be at the Hillsdale Cemetery, Petrolia. Donations can be made to the Canadian Cancer Society (www.cancer.ca)

Leonard George Brown passed away peacefully at C.E.E. Hospital in Petrolia on Saturday, July 6, 2019 with his family present after a valiant battle with cancer. Len was born in Seaford Town, Westmoreland, Jamaica on February 9, 1937. He was... View Obituary & Service Information

The family of Len Brown created this Life Tributes page to make it easy to share your memories.

Send flowers to the Brown family.