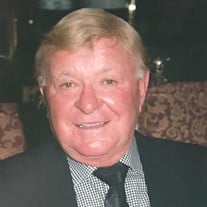 Jerry G. Huzevka, 82, peacefully left to be with his Lord and Saviour, Jesus Christ, on Thursday, May 17, 2018 at C.E.E. Hospital in Petrolia, Ontario. Jerry was the beloved husband to Joan (nee Lauzon) for over 57 years. Loving father to the late Marty (2014) (Kathy Wolfe), Mark (Joanne) Huzevka, Matt (Ivona) Huzevka, and the late Marshall Huzevka (1995). Proud grandpa to Kevin, Lindsay, Brandon, Jordan, Madison, and Mario. Brother to Betty (John) Smith. Predeceased by his parents Martin and Zuzana Huzevka. Jerry was a deep philosopher, born leader and mentor to his sons and grandchildren. He taught them integrity, moral ethics, self confidence, self sufficiency, pride in hard work, the need to contribute to the larger community and above all, to profoundly love and support their families. Jerry was born in Zbora, Czechoslovakia and immigrated to Alvinston, Ontario in 1936 at the age of 6 months. In 1953, Jerry moved to a farm near Petrolia and began farming with his Mother and Father. After completing high school and while farming, Jerry worked at Polysar in Sarnia for 10 years. It was during this period that Jerry met and married the love of his life, Joan Lauzon. Jerrys passion and dedication to various farming activities (ranging from beef cattle to Organic cash crops) further stimulated his entrepreneurial nature. Starting in the 1960’s, Jerry was involved in multiple farming related businesses which included farm equipment and commodity input sales, a commercial grain elevator, commodity brokering and sales of Organic crops to foreign countries. Jerry cared deeply about his fellow producers and was actively involved with a number of farming organizations which included NORM, The National Farmers Union (National Director), ACRES USA and the Ontario Soybean Growers Marketing Board (Vice-Chairman). Jerry’s strong sense of adventure, desire to learn, and love of people, took him around the world on both business and pleasure related trips. After retirement in 2011, he focused on motorhome travels across North America, singing and playing his guitar at “jamming” sessions, and spending time with his children and grandchildren. We have been blessed to have had Jerry in our lives and our memories of him will be treasured forever. Friends and extended family will be received by the family on Tuesday from 2-4 and 6-8 p.m. at the Needham-Jay Funeral Home, 4059 Petrolia Line, Petrolia. A funeral service will be held at Redeemer Lutheran Church, 419 Indian Rd. N. Sarnia on Wednesday, May 23, 2018 at 11:00 a.m. Interment in Hillsdale Cemetery, Petrolia. As an expression of sympathy, memorial donations may be made by cheque to the VON of Sarnia Lambton (www.von.ca). Memories and condolences may be shared online at www.needhamjay.com.

Jerry G. Huzevka, 82, peacefully left to be with his Lord and Saviour, Jesus Christ, on Thursday, May 17, 2018 at C.E.E. Hospital in Petrolia, Ontario. Jerry was the beloved husband to Joan (nee Lauzon) for over 57 years. Loving father to... View Obituary & Service Information

The family of Jerry G. Huzevka created this Life Tributes page to make it easy to share your memories.

Jerry G. Huzevka, 82, peacefully left to be with his Lord and...

Send flowers to the Huzevka family.