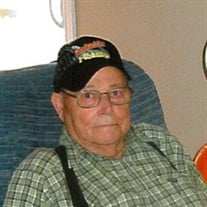 Passed away suddenly at C.E.E. Hospital, Petrolia on Friday, March 13, 2020. JOHN EDWIN “JACK” EDGAR, of Petrolia and formerly of Brooke Township, was in his 91st year. He was the loving husband of the late Shirley (nee Allan)(2016). He will be missed by his children Sharon Edgar, Linda and Robert Parker, Richard Edgar, and Dianne and Robin Neely, his grandchildren Adam (the late Kathy) Parker, Bobbi Lynn (John) Beaudoin, Tim Parker, Becky Ann (Michael) Parker, Curtis (Nicole) Neely, and Sheldon (Samantha) Neely, and his great grandchildren Colton, Savannah, Jackson, Ayden, Keeten, and Anna May. He will be missed by many nieces and nephews. Jack was predeceased by his parents Chester and Cora (nee Oremrod) Edgar, his brother Lloyd (the late Dorthea) Edgar, and his sister Lillian Edgar. Jack was a lifelong farmer on the 10th line of Brooke Township living in the same home he was raised in until his retirement in 2006. For over 30 years Jack sold for Pride Seeds. Visitors will be received on Wednesday from 5 to 8 p.m. at the Needham-Jay Funeral Home, 4059 Petrolia Line, Petrolia. A private service will be held at a later date. Interment will be in Alvinston Cemetery. As expressions of sympathy, memorial donations may be made to St. Paul’s United Church or the Lung Association (www.lung.ca).

The family of Jack Edgar created this Life Tributes page to make it easy to share your memories.

Passed away suddenly at C.E.E. Hospital, Petrolia on Friday,...

Send flowers to the Edgar family.