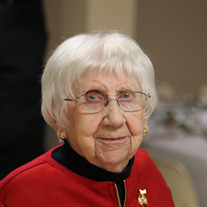 Evelyn Rawson (nee Irwin) 1918- 2018 Passed away in her 99th year Dear Family and Friends With much sadness we must inform you that Evelyn passed away suddenly on the evening of March 18 in her Petrolia condominium. Her beloved daughter Mona was at her side. Evelyn is survived by her sister Aldean Burgess and daughter Mona (Paul) Gudjurgis. She was predeceased by her husband Eric who passed away 2001 and her parents Foster and Florence Irwin. Evelyn was truly cherished and was highly respected by her extended family and large circle of friends in Petrolia and surrounding area. She was a rock. And an exemplary wife and mother. To most of her nieces and nephews, sister Aldean’s children, - and adopted nieces and nephews on Eric’s side of the family - she was an honorary mother. The same was true with their children. Children loved Evelyn and Evelyn reciprocated. She was always solicitous about the well being of others, particularly if she knew that they were experiencing problems. When Evelyn and Eric decided to sell their house on Eureka St. and buy a condominium in the first and only condominium building in Petrolia they were among the very first buyers. Eric never did see their condominium. But to Evelyn, the residents of the condominium very quickly became a caring extended family, and remained so to the very end. They were a blessing that enabled her to live in her condo for so many years. Evelyn was a farm girl. She met her future husband Eric while he was working as a farm hand. They married, and together persevered and overcame several grave misfortunes. As life became easier, they began to travel a bit. They visited Hawaii and Alaska, Australia and New Zealand. And they saw much of Canada and the US on numerous trips. On several of these adventures they accompanied Mona and son-in-law Paul. Evelyn was a devout and pious lady. She regularly read her cherished Bible. She was also an expert gardener. Her gardens at every house where she lived were beautiful. When she could no longer easily pick up a spade, or bend over with a spatula, she put on her supervisory white hard hat and advised Mona on all gardening matters while visiting her in Brampton during the summer. Evelyn was wise and very sharp, right to the very end. She regularly mastered crossword puzzles, and intently followed politics on the local, provincial and federal levels. We would like to thank Dr. Susan Mathers of Petrolia who regularly looked in and took care of Evelyn’s medical needs during numerous much-appreciated house calls over the years. And to especially thank Linda van Straten who was essentially a second daughter as well as a dearly loved friend of Evelyn’s. Linda phoned regularly, visited weekly, helped Evelyn with banking and many other matters Evelyn may be gone, but she will be in our hearts forever. Visitors will be received by the family on Saturday, March 24, 2018 at St. Paul's United Church, Petrolia at 11:30 a.m. followed by a funeral service at 1:00 p.m. Interment will follow at Hillsdale Cemetery. Arrangements entrusted to NEEDHAM-JAY FUNERAL HOME, 4059 Petrolia Line, Petrolia (519)882-0100. As an expression of sympathy, memorial donations may be made to C.E.E. Hospital Foundation (www.ceehf.ca), St. Paul’s United Church, Petrolia, or the Canadian Cancer Society (www.cancer.ca). Memories and condolences may be shared online at www.needhamjay.com

Evelyn Rawson (nee Irwin) 1918- 2018 Passed away in her 99th year Dear Family and Friends With much sadness we must inform you that Evelyn passed away suddenly on the evening of March 18 in her Petrolia condominium. Her beloved daughter... View Obituary & Service Information

The family of Evelyn Rawson created this Life Tributes page to make it easy to share your memories.

Send flowers to the Rawson family.