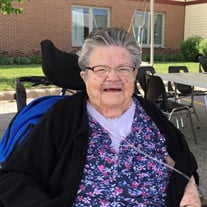 “A picture is worth a thousand words” This picture of Dora was taken on Friday June 4, 2021. It reflects her positive, cheerful outlook on life, enjoying nature with family and a fur baby by her side. Dora Alison (Wright) MacFarlane entered into eternal life on Wednesday June 9, 2021 at Fiddick’s Nursing Home Petrolia in her 100th year. Dora is reunited with her beloved husband, travel partner and best friend Robert (Bob) MacFarlane (October 2003). Dora’s spirit lives on in her 2 children, 5 grandchildren and 12 great grandchildren. Dora was a constant source of strength and love to her family and instilled in them strong ethics in every aspect of their lives. Dora worked along Bob’s side as a book keeper and “pay master” at the MacFarlane Dealership for over 35 years. Dora was a pillar of the Petrolia Community. She was a lifetime member of St. Paul’s United Church, a 60 year devotee to Margaret Stokes IODE, a member of the Eastern Stars and Petrolia Rotary, hosting numerous exchange students. Dora loved her time spent at “Auchterhaus” in Tobermory surrounded by family and friends feeding the chipmunks and cooking whitefish. In her spare time, Dora liked to read, play cards, host parties, knit, quilt and bake treats for her grandchildren. Dora loved to travel and was lovingly known as “Dora the Explorer”. Music and faith was always a part of Dora’s life and in 2020 a song composed by Greg Gilpin and sung by the Lambton Youth Choir was commissioned in her honor “I Love to Tell The Story” Dora was predeceased by her parents Mabel Wright (1984) and Newell Wright (1955) and “brother” Robert Wright (1999). Devoted and loving mother to Daughter Sandra Sylvestre (Vic) and Son Wayne MacFarlane (Marybelle). Proud Grandma Dora to her Grandchildren Rick Pineo (Debbie), Candie Shwanke (Wayne), Kristin MacFarlane (Chad), Jenny MacFarlane (Kevin) and Scott MacFarlane. Beloved Great Grandma Dora to Ryan and Amanda Pineo, Melissa Toole, Aaron Shwanke, Liam and Logan Crummy, Joshua, Julia and Jordan Morley, Makenna, Kylie and Cameron MacFarlane. She will be dearly missed but forever in our hearts. A very special thank you to the staff of Fiddick’s Nursing Home for their extraordinary care over the past 10 years. A private funeral service will be held on Wednesday, June 16 at 11am. The service can be viewed at www.facebook.com/NeedhamJay. Memorial donations to Petrolia Community Fund (cheques payable to SCF/Petrolia Community Fund).

&#8220;A picture is worth a thousand words&#8221; This picture of Dora was taken on Friday June 4, 2021. It reflects her positive, cheerful outlook on life, enjoying nature with family and a fur baby by her side. Dora Alison (Wright) MacFarlane... View Obituary & Service Information

The family of Dora MacFarlane created this Life Tributes page to make it easy to share your memories.

“A picture is worth a thousand words”

This picture of Dora was...

Send flowers to the MacFarlane family.