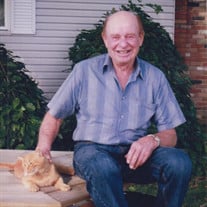 Donald Moore, of Oil Springs, died at Victoria Hospital, London on Thursday, February 3, 2022 in his 93rd year. He was loved by his family of 4 children, 11 grandchildren, and 10 great-grandchildren. Don was the loving husband to the late Norma (nee Cox)(2014). He will be missed by his children Janice and Gord Fuller, Leigh and Amy Moore, Laurie and Rick Lightfoot, and Rob and Judy Moore. He was a loved grandfather to Katie Fuller and Kris Black, Jackie Fuller and Jamie Huff, Melissa and Mitch Conliffe, Allison and Curtis Reimer, Christie and Dan Baron, Carly and Kyle Crombeen, Zak Lightfoot, Dylan Lightfoot, Emily and Dylan Fraser, Josh Moore and Bailey McCabe, Ashley Moore and Isaac Towell, and great-grandfather to Kylie and Wylan Chapman, Abby Conliffe, Liam Nelson, Shane, Dean and Wyatt Reimer, Beckett Baron, Eve Crombeen, and Xavier Fraser. Don will also be missed by his loving friend and companion Dettes Shea and her family. Don is survived by his sister Elaine Kelly and sisters-in-law Donna Moore and Donna Cox. Don was predeceased by his parents Zacarias and Edna Moore and his brother Garnet Moore. Don was a farmer all his life. He had a strong work ethic, but he also truly loved farming and for much of his farming career Don thought nothing of spending 18 hours a day on farm work, mostly outdoors. Through the years he met so many wonderful people - other farmers, machinery dealers, crop input salespeople, members of farm organizations such as the Soybean Board, the Wheat Board, local council members, community-minded people involved with Alvinston Optimists and the Sarnia Community Foundation, etc. and he remembered each of them for their own unique abilities. Don enjoyed travelling and he was especially interested in seeing how farming was being done in other countries such as Spain, New Zealand, Brazil, and Costa Rica. On some of his trips he met travelers who became lifelong friends. Don was a man known for his good humour and charm - a “character” willing to share interesting comments with anyone in a conversation, no matter whether he had known you for years or had just met you. He usually made an impression as a friendly person with a warm smile and bright, twinkling eyes. Throughout his 92 years, Don was blessed with a loving family, sincere friendships, wonderful neighbours, and many acquaintances in the community and beyond. On Don’s behalf, his family would like to extend thanks to each and every person who encountered Don, helped him in any way, or stopped and had a conversation with him. You know who you are, and we know Don is grateful for your interest in him, your assistance, and your friendship. A hard-working farmer, Don is now at rest. We are sure he will be surveying the fields from afar, come spring. We will honour Don’s request for a small private funeral, to be held at a later date, with interment in Oil Springs Cemetery. As expressions of sympathy, memorial donations may be made to C.E.E. Hospital Foundation (www.ceehf.ca) and St. Joseph’s Hospice (www.stjosephshospice.ca). Arrangements by Needham-Jay Funeral Home www.needhamjay.com.

Donald Moore, of Oil Springs, died at Victoria Hospital, London on Thursday, February 3, 2022 in his 93rd year. He was loved by his family of 4 children, 11 grandchildren, and 10 great-grandchildren. Don was the loving husband to the late Norma... View Obituary & Service Information

The family of Donald Moore created this Life Tributes page to make it easy to share your memories.

Send flowers to the Moore family.