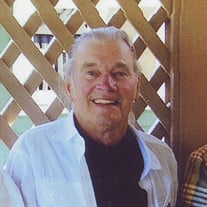 Peacefully, surrounded by family on Friday, September 8, 2017 at Bluewater Health, Sarnia, Darwin Heath Hussey passed away in his 89th year. Beloved husband to Rita Hussey (née Lunde) for 62 years. Loving father to Glenn (Mariann) Hussey, Gina (Rob) Bell and Mike (Andrea) Hussey. Proud grandpa and papa to Anna Hussey, Troy (Jen) Bell, Katie (Blake) Richmond, Emily Hussey and Connor Hussey and great grandpa to Kylie and Bryson Bell and Scarlett Richmond. Darwin will be dearly missed by his brothers and sisters-in-law, Wayne (Jackie), Paul (Connie), Dale (Marion) and Robert (Ruth) and many nieces and nephews. Predeceased by his parents Eric and Vera Hussey. Darwin's life is chock full of adventures and experiences only found in books and movies. Born in Petrolia, he spent his youngest years in India and Trinidad, returning to Petrolia where he grew up. He won the LCCVI track and field championship in 1943 and after he finished high school, he worked drilling oil in Trinidad, Alberta and Saskatchewan where he met Rita. Darwin retired from Imperial Oil as a pipe fitter after 23 years of service and decided to ride his bicycle across Canada at the age of 58. After that adventure, he returned to work at Ethyl for another 5 years. Darwin was the number 1 fan of Petrolia midget hockey, a dedicated patron of the Petrolia library and loved a good debate at Tim Hortons. He was immensely proud of his children, grandchildren and great grandchildren. Visitors will be received by the family on Tuesday from 6-8pm at the Needham-Jay Funeral Home, Petrolia, where a funeral service will be held on Wednesday, September 13, 2017 at 11:30am, with one hour of visitation prior to the service. As an expression of sympathy, memorial donations may be made by cheque to the Petrolia Minor Hockey Association or the C.E.E. Hospital Foundation (www.ceehf.ca). Memories and condolences may be shared online at www.needhamjay.com

The family of Darwin Hussey created this Life Tributes page to make it easy to share your memories.

Send flowers to the Hussey family.