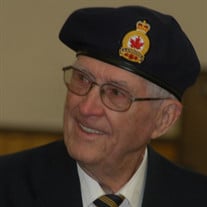 Surrounded by his children, our father, Claire “Chris” Christopher passed away peacefully at Meadowview Villa in Petrolia at the age of 100. Dad was born on the family homestead in southern Saskatchewan and was the oldest of seven sons born to Caster and Annie. After surviving the dust storms and depression of the “Dirty Thirtys”, he enlisted in the Canadian Army in 1941 and was sent to Regina to join the South Saskatchewan Regiment. On manoeuvres later that year he suffered such severe frostbite that he was sent home to recover. He decided he might be better off in the Royal Canadian Air Force and began training as an aero-engine mechanic in 1942. It was while he was training at the St. Thomas Technical School that he met young Patricia Clarke on a blind double date with a friend. She was his friend’s date but they were smitten and were later married in 1944 at her home in Sarnia. He was discharged from the RCAF in Calgary in 1946 and he and mom and first-born Sherry moved to Ontario to raise a family. Dad soon became a proud member of the Royal Canadian Legion Branch 18 in Wallaceburg and served with the Legion for 70 years. He trained as a tool and die maker and worked in Wallaceburg for 37 years. He loved sports and played for the Port Lambton Falcons Senior Baseball team and the Dresden Senior Mens’ hockey team. He also played for the RCAF hockey team during the war while he was stationed at RCAF Moncton. Dad started golfing in his 40’s at the newly-opened Mooretown Golf Club (formerly St Clair Parkway) and golfed into his late 80’s. He was always happy when he beat his sons on the golf course. He curled in the winter and fished in the summer. Dad lived in Port Lambton on the St. Clair River most of his adult life. Early on, he and our mother started the Port Lambton District Credit Union in our home and managed it at two other locations in Port Lambton for over 25 years. He also volunteered with the Port Lambton Fire Department for many years. Music was important to Dad, especially country and western music. He bought his first guitar in 1932 from the Chicago Conservatory of Music and played in a few bands with other local musicians in Port Lambton and Wallaceburg, often at community social events and picnics. He continued playing the guitar until just a few weeks ago and often serenaded the staff at Meadowview. Dad had a few goals in life. The first was to shoot a hole-in-one. He did that in his late 80’s at the Baldoon Golf and Country Club. His next goal was to live to be 100. He accomplished that last October. And his third goal was to see the Maple Leafs win another Stanley Cup. Go Leafs Go! He was predeceased by his wife and our mother Pat Christopher in 1986 and his brothers, Norm, Curtis, Stan, Earl, Russell and Harris. He will be missed by his children, Sherry and Harry Wismer, Doug and Pat Christopher, Don and Mary Christopher and Marsha and Jim Cox. He’ll be remembered often by his grandchildren Jill, Chris (Nicole), Clarke(Shannon), Heather (Mark), Josh, Max and Claire, his great grandchildren, Jaylin, Kara, Macy, Luke, Gavin and Bella, his sisters-in-law, Wyn Christopher and Liz Clarke, and many nieces, nephews and cousins. In keeping with dad’s wishes, there will be no visitation or service. A Celebration of Life will be held at the Wallaceburg Legion at a later date. Remembrances can be made to the Wallaceburg Legion Branch 18 or the charity of your choice. The family is appreciative of the care, support and understanding provided by the angels who work and volunteer at Lambton Meadowview Villa in Petrolia. Thank you all for your loving care of our father.

Surrounded by his children, our father, Claire &#8220;Chris&#8221; Christopher passed away peacefully at Meadowview Villa in Petrolia at the age of 100. Dad was born on the family homestead in southern Saskatchewan and was the oldest of seven... View Obituary & Service Information

The family of Claire Christopher created this Life Tributes page to make it easy to share your memories.

Surrounded by his children, our father, Claire “Chris” Christopher...

Send flowers to the Christopher family.