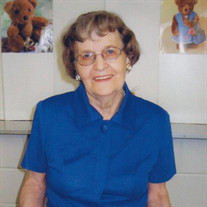 The death of Mrs. Joanna Cecile Hill occurred on September 27, 2020 in the Fiddick’s nursing home, Petrolia, Ontario, where she had lived for the past six years. Cecile, the youngest child of Alfred Dice and Fanny Phillips had been born on 28 May, 1924, and grew up on her father’s homestead in Alingly Saskatchewan. She took a business course in Saskatoon and was working in a meat packing plant when she was invited by her friend Margaret Hill to visit the Hill farm at Star City Sask. where she met her future husband James Hill, the eldest son of George Hill and Bella McPherson. Cecile and Jim were married on January 9, 1950 in St. Alban’s Cathedral, Prince Albert, and lived on the Hill farm until their retirement in 1977 when they moved to Prince Albert, where they resided until 1998 . While living on the farm Cecile and Jim raised two daughters, Helen Lorraine (married to Neil Gregory of Fort Erie, Ontario) and Louise Elaine (married to Rev. Robert Gibson of Petrolia, Ontario). In 1998 they moved to Strathroy, Ontario, to be closer to their children. After a few years in Strathroy failing health caused them to move into a seniors’ residence in Petrolia. Cecile regularly attended St Thomas’ Anglican Church in Star City and was an active member of the local Anglican Church Women’s group. In addition she worked tirelessly for Camp Okema, the diocesan church camp at Emma Lake. Other community involvement included her membership in the Order of the Eastern Star in every community in which she lived and membership in the Star City Homemakers Club. In early November 1959 she and her two daughters were followed by the Star City fire truck on their way home from church, only to discover that it was their house on the farm that was burning down. The Hill family lost everything in the fire, but were able to build a new house on the farm the following summer. Cecile was predeceased by her husband, Jim Hill, her parents, her older sister, Olive and her brother John. She is survived by her two daughters and their husbands, Three grandchildren, James Gregory, Ella Gregory, and Duane Gibson, and four great grandchildren. On learning of his grandmother's death, James Gregory posted the following comment on Facebook: "No one is finally dead until the ripples they cause in the world die away." (Terry Pratchett Reaper Man.) Jim and Ce Hill made plenty of ripples. Some larger than others, but it will take a long time before those ripples begin to subside. At that point one must remember this quote also by Terry Pratchett "Do you not know that a man is not dead while his name is still spoken?" (Terry Pratchett, Going Postal) Knowing Duane and his love of family stories Jim and Ce's great grandchildren will be sharing her name for decades to come. This is the way it should be. Cremation has taken place. There will be no visitation. A funeral service will be held at a later date. Interment of cremated remains will be in Star City Cemetery, Star City, Saskatchewan Memories and condolences may be sent online at www.needhamjay.com.

The death of Mrs. Joanna Cecile Hill occurred on September 27, 2020 in the Fiddick&#8217;s nursing home, Petrolia, Ontario, where she had lived for the past six years. Cecile, the youngest child of Alfred Dice and Fanny Phillips had been born... View Obituary & Service Information

The family of Cecile Hill created this Life Tributes page to make it easy to share your memories.

The death of Mrs. Joanna Cecile Hill occurred on September 27,...

Send flowers to the Hill family.