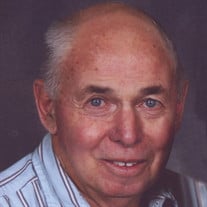 On Thursday, October 26, 2017 at C.E.E. Hospital of Bluewater Health in Petrolia, William "Bill" Robert King, passed away. Beloved husband to Joan King (nee Esseltine) for 54 years. Loving father to Carolyn King, Vicki (Patti Dobbin)King, Don (Karen) King, Virginnia (Carl) Bright. Proud grandpa to Abigail, Emma and Clara Mitchell, Kelsey, Taylor and Greg Bright and will be fondly remembered by Matt and Josh Harper. Loved brother to Ron and Delores King, Anne and Bob Wilkinson, Marg and Craig Smith, Murray King, Norm and Gwen King, David and Teresa King, the late Marie Kernohan, the late George King, and the late James (Judy) King. He will be missed by many nieces and nephews. Predeceased by his parents Gordon and Reba King. Survived by his in-laws, Barbara (Charles) Birdsey, and Robert (Elizabeth) Esseltine. Bill was an active member of the Camlachie United Church, a director in the Steam Threshers Association, a past member of the Plympton-Wyoming Fair Board and a past president of the Lambton County Junior Farmers Association. Bill loved his family first and the land second; a lifelong farmer whose ties to the community are strong, and will be dearly missed by all who knew and loved him. Visitors will be received by the family on Sunday, October 29, 2017 from 1-4 and 7-9 at the Wyoming Chapel, 650 Broadway St. Wyoming. A funeral service will be held on Monday, October 30, 2017 at 11am at the Camlachie United Church, 6784 Camlachie Rd, Camlachie. Interment in Mount Carmel Cemetery. As an expression of sympathy, memorial donations may be made by cheque to Camlachie United Church Memorial Fund or the Canadian Cancer Society. Memories and condolences may be shared online at www.needhamjay.com

The family of Bill King created this Life Tributes page to make it easy to share your memories.

Send flowers to the King family.