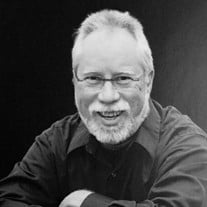 On February 22, 2018, Lambertus (Bert) Lukas de Roo, died peacefully at University Hospital, London, Ontario from a post-surgical infection at the age of 64. Born May 16, 1953, he was the son of Dutch immigrants, Lukas and Hinderkien. He caught a ride in his mother’s belly on the boat. He grew up in the West Hill suburb of Toronto. He heard the voice of God calling him into Christian ministry while pumping gas. So he entered the Baptist Leadership Training School, Calgary. Here he met his best friend and wife of 40 years, Evelyn Ward from Winnipeg. He was the first in his family to graduate University (BA,York, 1979, MDiv, MacMaster, 1982). Their children, Katharina (Katie), 1983 and Lukas, 1986 were born in Ottawa. He served as a student minister in Ontario at First Baptist, London, North Burlington Baptist, and Blythwood Road Baptist, Toronto and prison ministry "Project Reconciliation”, Kingston. Ordained in 1983 he then served Eastview/Clarence pastoral charge in Ottawa and Trinity Baptist Church, Petrolia, ON. Bert liked to build things: tree forts, dune buggies, cottage additions, and so to satisfy the fascination to create with his hands he took a picture framing course. In 1982 he bought his first Apple computer and was hooked. He combined these two things in 1983 when he started writing a program to price custom picture frames in his little shop in the basement of the Ottawa parsonage. His last pastorate was a bi-vocational ministry along with owning The Master’s Touch Picture Framing in Petrolia. The software became his passion and was officially launched in 1995 as “FrameReady Point of Sale Software” when he had the audacity and courage to attend his first trade show. In 1998, Bert pursued developing software full time by beginning SoftTouch Solutions Inc and finding a new flock to shepherd. The coolest thing he ever built was his business. A good day at work for him was designing a solution for a unique challenge presented by a client and then giving that benefit to all his software users. FrameReady now has thousands of users in 10 countries. The Professional Picture Framers Association awarded him the highest industry honour with its technology award in 2012. He was highly praised as hard-working, honest and kind, a man full of integrity. On January 31, 2018 Bert and Ev sold the business insuring that FrameReady would be advanced to the next generation. Bert skillfully renovated their 118 year old home right from the bones. He was on the inaugural Board of Directors of Habitat for Humanity Sarnia/Lambton. He had many fun times with Petrolia Community Theatre and volunteered at Christ Church, Anglican. In the summers he and Ev moved to their happy place, Gimli, Manitoba where he played tennis, welded recumbent trikes, sailed and tasted semi-retirement. Bert fulfilled his life-long dream of learning to play the piano at age 62. He was a gentle soul with a questing, curious spirit. Mourning him are his beloved wife, Evelyn Ward de Roo, children Katie (Tom), London, Ontario and Lukas (Chloe), Buderim, Australia. The “little guys” he loved most, his grandsons, Ben and Teddy, will miss their Opa terribly. Predeceased by his parents and brother Hank (2017) and survived by sisters Swanja de Jong, Ankie Hewett, and Margaret Gabriel. Donations can be made to Habitat for Humanity Sarnia/Lambton, 1787 London Line, Sarnia, Ontario, N7T 7H2., www.habitatsarnia.org Visitors will be received on Sunday, March 4, 2018 from 2 to 4 and 7 to 9 p.m. A funeral service will be held on Monday, March 5, 2018 at 2:00 p.m. from Christ Church Anglican, 414 Oil St., Petrolia. Interment in Hillsdale Cemetery, Petrolia. Manitoba friends, please join us for a celebration of Bert’s life in Gimli in early summer.

On February 22, 2018, Lambertus (Bert) Lukas de Roo, died peacefully at University Hospital, London, Ontario from a post-surgical infection at the age of 64. Born May 16, 1953, he was the son of Dutch immigrants, Lukas and Hinderkien. He caught... View Obituary & Service Information

The family of Bert de Roo created this Life Tributes page to make it easy to share your memories.