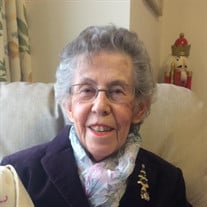 Passed away peacefully with family by her side on Monday, September 28, 2020 at Fiddick’s Nursing Home, Petrolia. Bernadette “Bernie” Lebert (nee Chauvin) was in her 90th year. Beloved wife of the late Urbain “Herbie” Lebert (2019) for 63 years. Loving mother of Bev (Paul) Szabo, Maurice (Carol) Lebert, Lorraine (Kent) Bauman, Colette (Howard) Whiting, and David Lebert. Cherished Mémé of grandchildren Joy (Bryan), Philip, Nathan, Evan, Daniel, Stephanie, Lindsay, Samantha, and Caleb. Dear sister of Herman (Pat), Norman, Shirley (Felix) Laporte, and sister-in-law Carol. Predeceased by her parents, Edmond and Lottie, and infant son, Dennis and brothers Edward, Raymond and Steve. Bernadette will also be missed by her many nieces and nephews. Bernie and Herbie lived much of their lives in Lambton County where they farmed and raised their family. Bernie was an avid gardener and quilter. She also enjoyed spending time at their Miller Lake cottage, visiting with friends, and playing spirited games of euchre. Bernadette’s family would like to thank Dr. Daniel for his exemplary and compassionate care, all those who kindly cared for Bernie at Lambton Meadowview and Fiddick’s, her warm-hearted friends and neighbours at the Royleigh in Wyoming who assisted her in so many ways, and Megan, her very special caregiver. Cremation has taken place. There will be no visitation. A private funeral mass will be held at a later date at St. Philips Church in Petrolia. Interment will be in Mount Calvary Cemetery, Wyoming. As expressions of sympathy, memorial donations may be made to the Alzheimer Society of Canada (alzheimer.ca/en/sarnialambton).

The family of Bernadette Lebert created this Life Tributes page to make it easy to share your memories.

Passed away peacefully with family by her side on Monday, September...

Send flowers to the Lebert family.