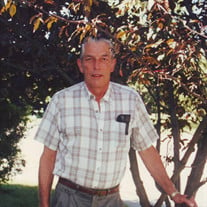 Ben Franklin Bridge of Petrolia, passed away January 2, 2018 at Bluewater Health in Sarnia surrounded by family. Early in his career, Ben became licensed as an auto-body mechanic. He began working at Seaforth Motors, and subsequently Lambton Ford in Sarnia. Together with Bob Taylor, he went on to start his own business, B&B Collision in Petrolia, in 1974. For the last 25 years, Ben partnered with John Drury. John, who is now owner of B&B Collision, was not only a business partner, but he and his wife, Roxanne, have been true and loyal friends. Ben enjoyed spending time with friends and family. He enjoyed fishing trips, but didn’t like to catch fish, went on hunting outings, but did not want to kill a deer. Ben sponsored and played softball with the B&B Collision teams in Petrolia and Wyoming until he was 70 years old. He was an active member of the Royal Canadian Legion, BR 216. Ben was a supporter of Helen’s Bar and The Squire in Petrolia, where he and friends held their meetings. Family was the most important thing to Ben. He supported, mentored and loved. He instilled values of integrity, truth, honesty and strong will. The work ethic he passed on is second to none. Loving father to Laurie (the late Tom), Ivan (Connie) and Lois (John). Proud grandpa to Christine, Barbara (Haddy), Krista (Joe), Brittany, Donny (Kelly), Danny (Charlene) and Ben (Allison) and great-grandpa to Skyler, Julie, Hudson, Jayde, Rowan, Paisley, Kylie, Matthew and Ben. Brother to Glen and Allen (Marilyn) and brother-in-law to Karen. Predeceased by his parents, George and Jean Bridge, his brother Harold and his sister-in-law, Jean. He will be missed by several nieces and nephews. Arrangements entrusted to the Needham-Jay Funeral Home, 519-882-0100. Cremation has taken place. A memorial service will be held at the Petrolia Royal Canadian Legion on January 20, 2018, from 1-4p.m. Burial to follow in warmer weather on a date to be determined in Brussels. As an expression of sympathy, and in lieu of flowers, memorial donations may be made to the Royal Canadian Legion. Memories and condolences may be shared online at www.needhamjay.com

Ben Franklin Bridge of Petrolia, passed away January 2, 2018 at Bluewater Health in Sarnia surrounded by family. Early in his career, Ben became licensed as an auto-body mechanic. He began working at Seaforth Motors, and subsequently Lambton... View Obituary & Service Information

The family of Ben Bridge created this Life Tributes page to make it easy to share your memories.

Send flowers to the Bridge family.