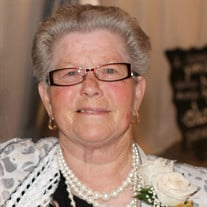 The Lord called home our dear mother, Alice Pool, on October 26, 2019 at Lambton Meadowview Villa at the age of 82. Alice was predeceased by her husband Bill (January 26,1934-June 28,2002) whom she married on January 13, 1962, by her parents, Tjebbe and Alberdina Feenstra, and by Bill’s parents Anna VanderVeer and Klaas and Antina Pool. Alice was the oldest daughter in the Feenstra Family. She will be remembered by her brothers Jake and his wife Lydia Van Klaveren, Henry and his wife Jane, Frank, Jim and his wife Gayle and by her sister Hilda and her husband Neil Honselaar. She will also be remembered by Bill’s remaining family, Anna Haaksma, Hijlke and Willy Pool, and Rita Pool. Alice was also predeceased by many family members including Donna Feenstra, Sharon Feenstra, Minne and Jean Pool, Wietse and Nellie Pool, Jack Pool, and Jim Canary. Alice was a graduate of Petrolia High School. She was also a graduate of the Sarnia General Nursing School (1959) which she took great pride in. She worked many years as a Registered Nurse at the Sarnia General Hospital and retired in 1996. Alice leaves behind her son, Colin and Margaret Pool and their family, Mitchell and Robin Pool and their children Jocelyn and Claire, Alan and Celina and their daughter Ashtyn and new baby due in April, Virginia Pool (James Crowe), Maggie and Graham Bosman, and Bailey Pool (Adam Baan). Also left behind is her daughter, Diana and William Schenk and their family, Jonathan and Sarah Schenk and their children Thomas and Henry, Michael Schenk, Alicia and Scott McGlynn and their children Brody and Colton McGlynn, Daniel Schenk and his son Ryker, and Andrew and Paige Schenk and their daughter Aubrey. We as a family would like to thank Dr. Mall and the wonderful RN’s, RPN’s, PSW’s and laundry and cleaning staff on 2 North at Lambton Meadowview Villa for their exceptional care of Mom. And a very special thank you to Allison and Sarah. She was also an aunt to many nieces and nephews. Also thanks go to Mom’s church family at Covenant Christian Church for their continued support for Mom. Visitation will be held on Tuesday October 29, 2019 from 6-9 pm. at the Wyoming Chapel of Needham-Jay Funeral Home, 650 Broadway St., Wyoming. A private family graveside service will be held at Wyoming Cemetery. In lieu of flowers, please consider a donation to John Knox Christian School of Wyoming,Ontario.

The family of Alice Pool created this Life Tributes page to make it easy to share your memories.

Send flowers to the Pool family.